So I finished stoning this pink/fuchsia smooth dress ages ago, but never shared the final product.

Here’s how it started:

Stage 1: Stoning the lace with volcano and heliotrope 16ss stones (both are special effects stones)

Stage 2: Added fuchsia Czech stones to the ruched areas and a bunch more heliotrope in different sizes to the bust/back, as well as a few large fancy stones.  Also some hyacinth AB to flower centers/swirly lacy bits. 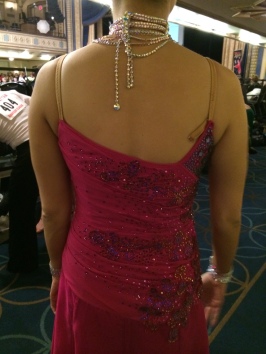 It’s about 20-24 gross worth of stones, I think? Which translates to a couple of thousand. A whole lot of shiny, pretty much (though honestly, not that much compared to designer dresses.)  I didn’t keep track of how much time it took, but probably 10-20 hours? But, it’s fun! Kind of a relaxing activity.  You can just put on some music or some tv show you don’t mind half-watching and the time goes by.

A couple things I figured out while doing this – if you have mesh layered over another fabric, put a plastic bag in between the layers so that the glue doesn’t seep all the way through.  Especially if there’s ruching involved with the mesh.  I ended up just readjusting the ruching and stoning most of the surface to make sure there was enough coverage.  Also, don’t let the glue dry completely before peeling the plastic bag away, or else you could get bits of plastic glued to the dress.  Another lesson – again, with double layered fabric, it might be better to sew large sew-on stones only on one layer instead of going all the way through both, mostly so it looks nicer on the inside.  Not a huge deal, but something I would keep in mind for the future.